The refuge is an unsurpassable starting point to venture across the glaciers of Mt. Tronador, unique in Northern Patagonia for their large size and accessibility. Due to the diversity of the visiting public and according to its expectations, we offer different experiences for every level. This implies the use of specialized techniques and the provided gear, thus making it essential to have the escort of professional mountain guides, certified by the Argentine Mountain Guides Association and enabled by the Nahuel Huapi National Park. They are the ones with the knowledge and the expertise to guarantee a safe and highly educative experience.
To access our excursions we recommend booking in advance.

A very relaxed activity with a recreational and educational approach which takes place very near to the Meiling refuge. Aimed to a public over ten years old without any ice climbing background and the wish to experience and enjoy the beauty of this unique and wonderful melting ice field.

The excursion takes three and a half hours, including preparations and numerous pauses, and never turns into a sustained walk. The guide teaches the basics about how to use the provided gear and gives general explanations about glaciers, the volcanic origin of this mountain, etc. while strolling around on an ice field of breathtaking size and colors. There are many pauses for taking pictures and for the explanations. Finally, a suitable place to perform a basic climbing practice at reach for everybody’s level is chosen. One at a time the participants descend a few meters inside one of the crevasses with the help of the safety gear and then climb out on one of its walls.

For those who need to catch the five-o’clock bus at Pampa Linda there is a convenient schedule from 9 am until 12:30. For the ones who choose to stay longer at the refuge the excursion can also take place in the afternoon. 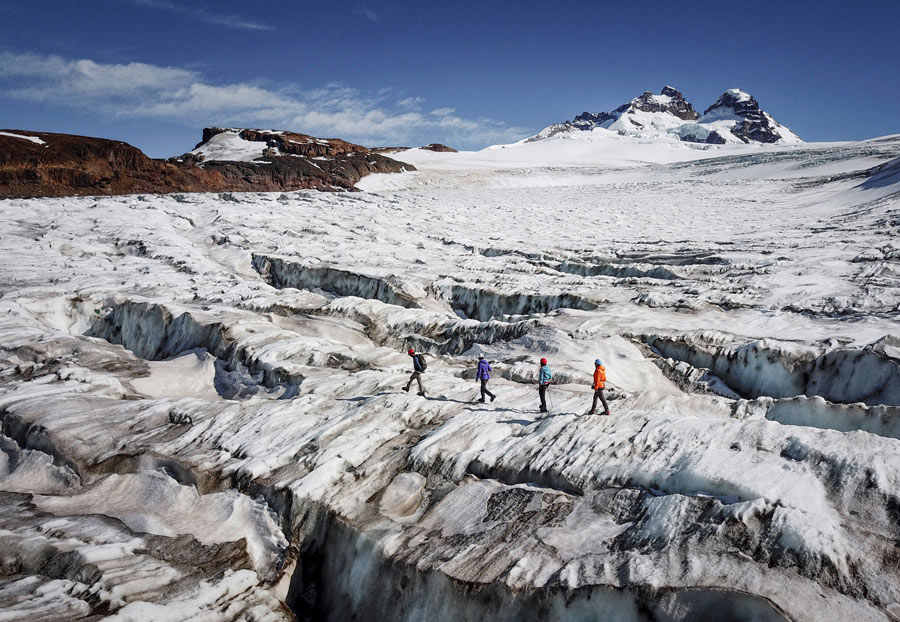 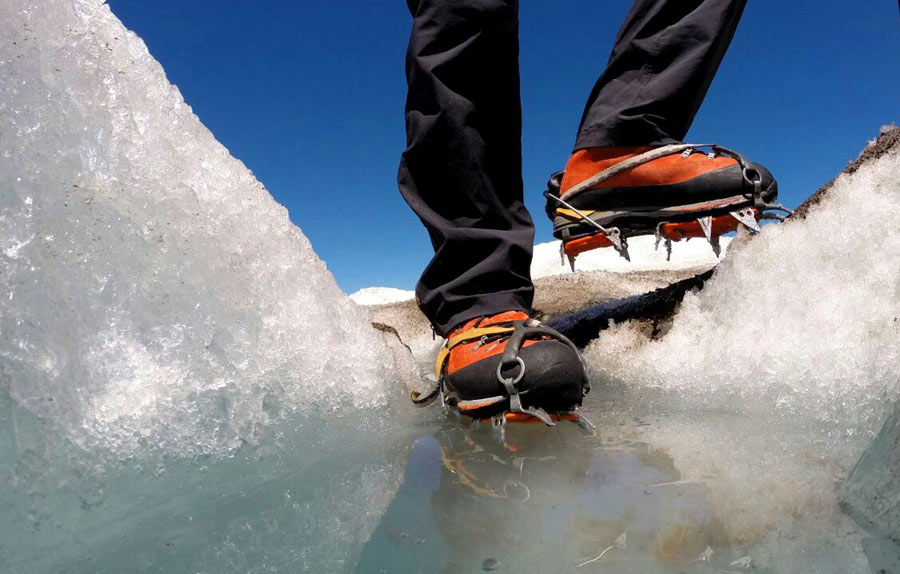 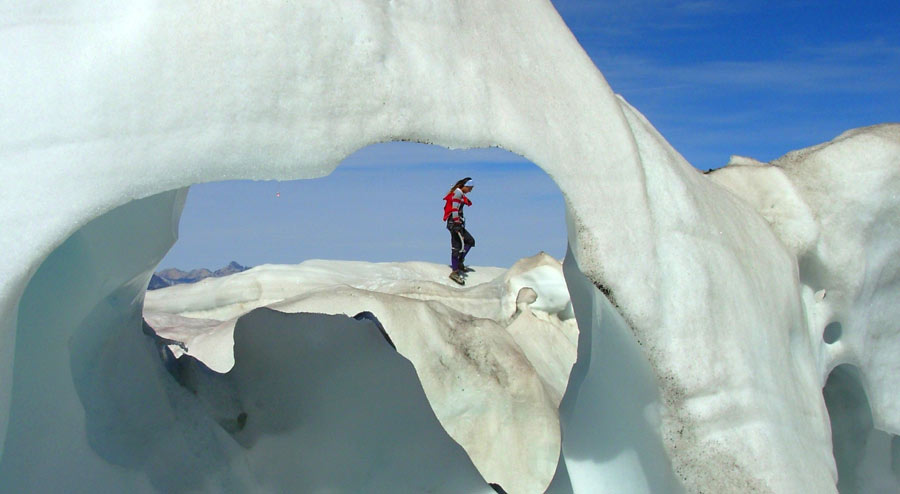 Certainly, one of the most attractive treks that can be done in the mountains of the Nahuel Huapi National Park due to the beauty of the surroundings, the variety of environments involved, it’s accessibility, and the comfort provided by the refuges.

The traverse goes from door to door between the Meiling (6150 feet) and Rocca (Paso de las Nubes, 4700 feet) refuges and can be done in any of the two directions. From the four hours that takes to complete the itinerary, one of them is used to cross the glacier, which is flat almost all the way and has a low to moderate difficulty depending on the snow condition. Crevasses in the ice can be observed here so the normal safety protocols for this kind of terrain are applied, such as having the group roped up. The rest is a walk on scree over steep slopes and along a ridge with spectacular views of the Frías and Alerce glacial valleys, with their woods, cliffs, waterfalls, mountain lakes and glacier tongues.

This excursion can be included in a circuit based in Pampa Linda or be combined with the touristic navigation service across lakes Frías and Nahuel Huapi. 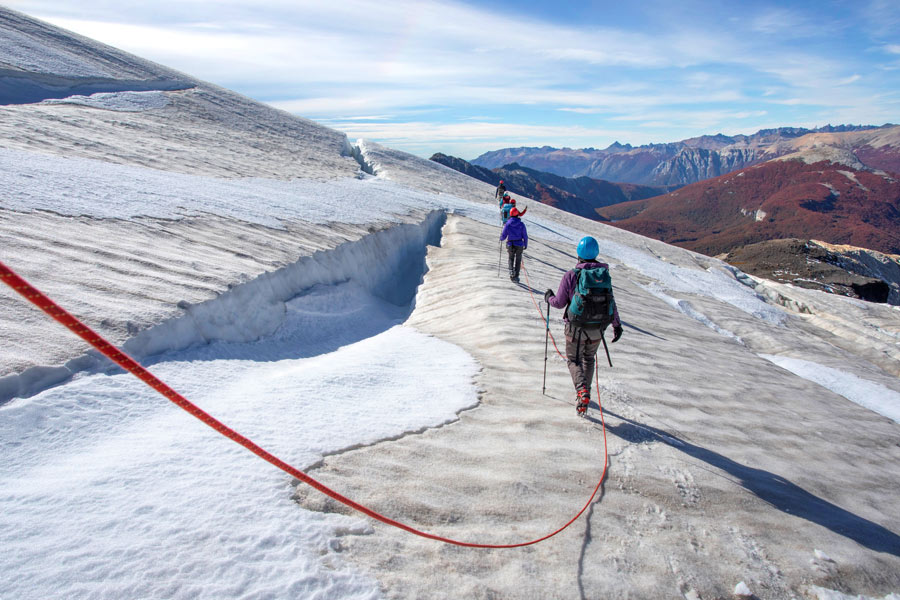 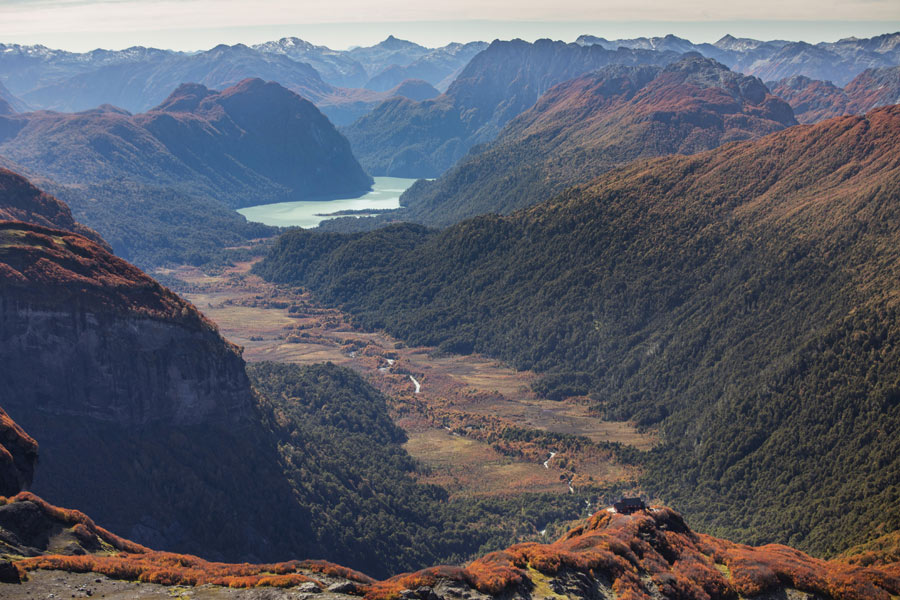 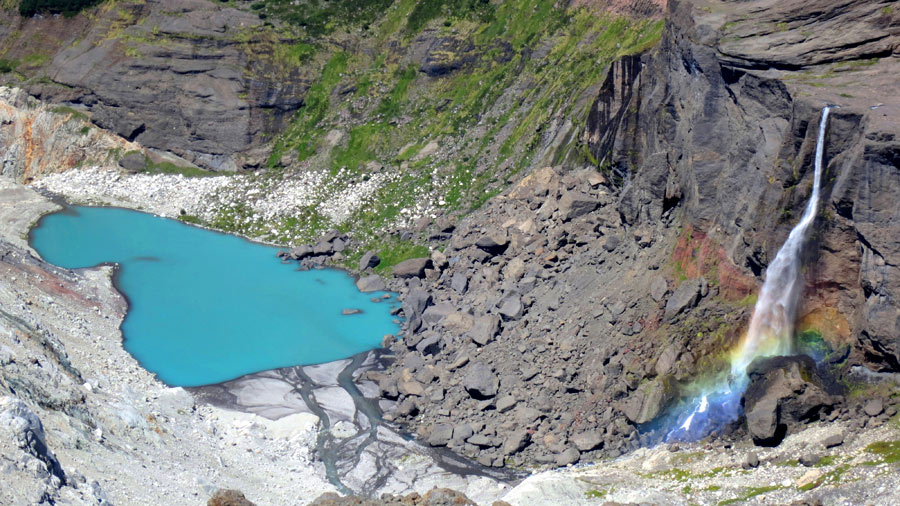 It combines an excursion on high mountain glacier terrain, ascending to a summit with privileged view, with the traverse between the Otto Meiling and Agostino Rocca refuges. The 7700 ft asl summit of La Motte ridge provides an astonishing close view of the International and Argentine peaks of Mt. Tronador, glacier and Lake Frías, Punta Cóndor, etc.

The trip goes through a wide variety of terrains, such as glaciers, rocky ridges, scree and marsh. It starts with the morning preparations at the Meiling refuge and heads then west, up along the watershed between glaciers Alerce and Castaño Overa until La Motte Ridge. The last part before the summit is a short but steep slope that has to be climbed with the aid of the safety gear.

From that point the descent goes along the north side of the ridge between glaciers Frías and Alerce, with an excellent view of River Frías. It keeps going down on the north side of the Alerce glacier until its edge. Then the technical gear is left behind to continue walking on a rocky ridge with panoramic views of Lake Alerce and Paso de las Nubes. After a steeper stretch of the mountains North Slope the Agostino Rocca refuge is reached. 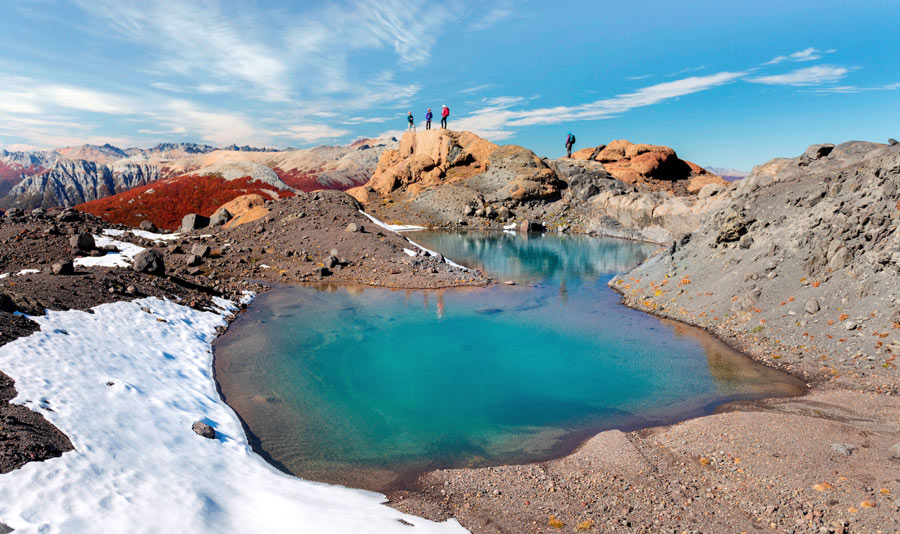 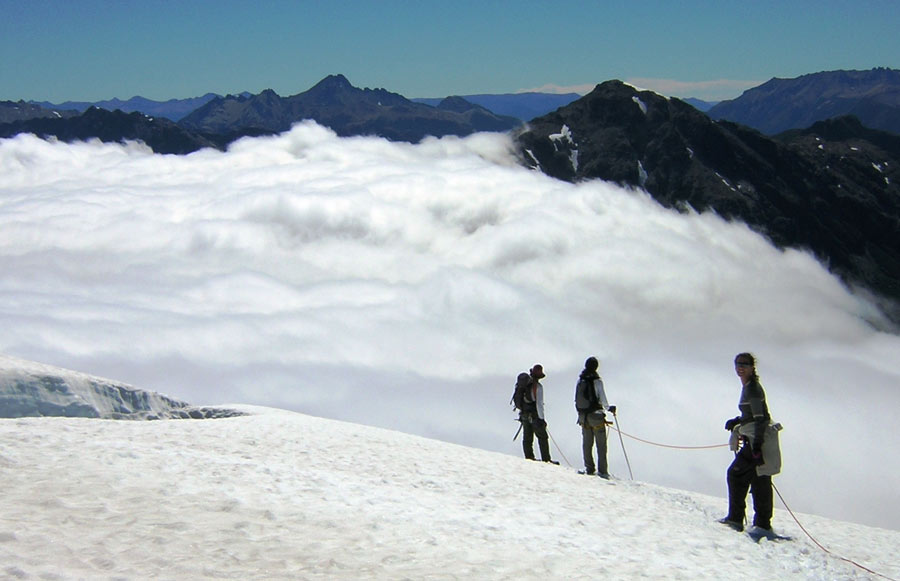 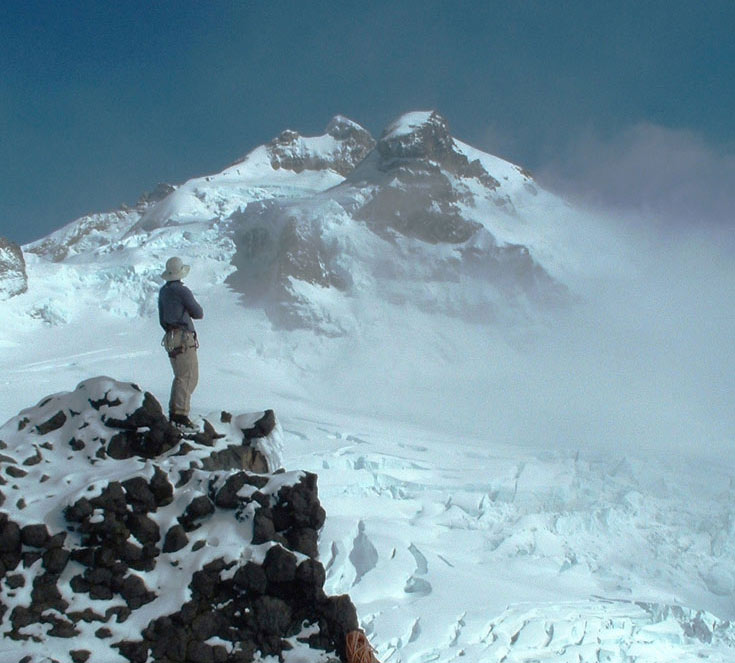 An ascension reaching one of the best panoramic viewpoints of Mt. Tronador and the Nahuel Huapi National Park. The summit of the famous La Motte ridge is 7700 ft asl and from there it is possible to admire the north side of this icy giant, including the Argentine Peak, glacier Frías, Punta Cóndor, etc.

Starting from the Otto Meiling refuge, after gearing up the walk heads west climbing gently along the ridge between glaciers Castaño Overa and Alerce to end up on an intermediate part of the La Motte ridge. There preparations are done for the short but steep final stretch to the summit.

After summiting the excursion takes downhill along the opposite side of the ridge, between glaciers Frías and Alerce with great views of the Frías River and the Paso de las Nubes area. Finally, glacier Alerce is crossed back to the Meiling refuge completing a circuit.

The trip takes between three and four hours, including stops, which allows people to descend after to Pampa Linda on the same day and take the bus back to Bariloche. 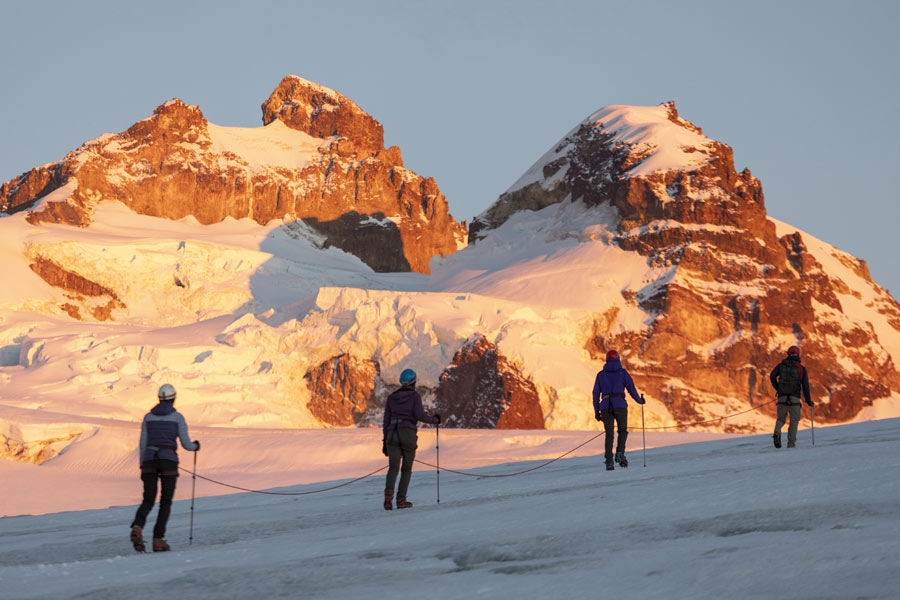 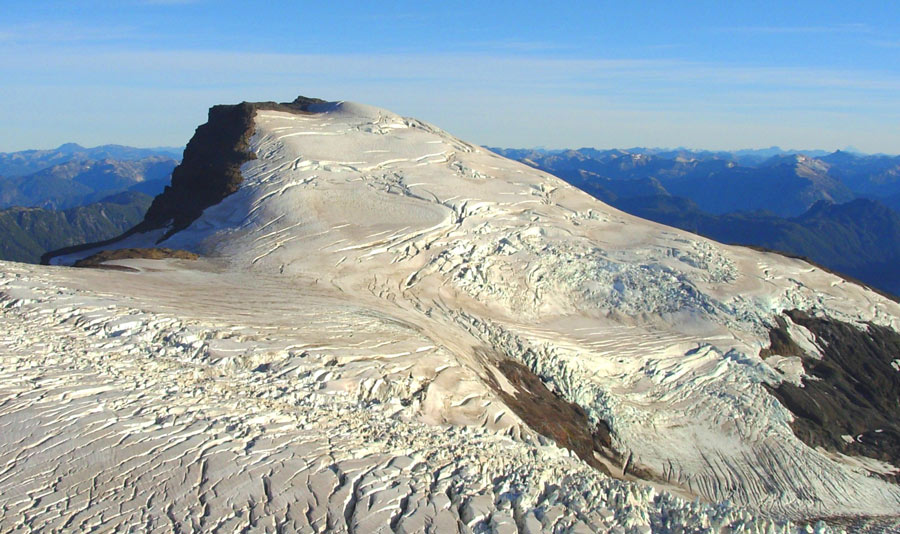 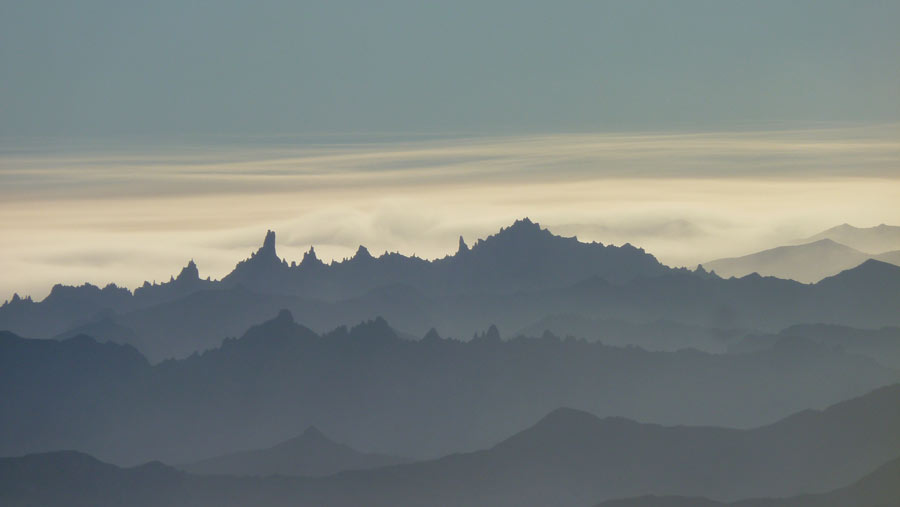 The Argentine peak of Mt. Tronador rises up to 10500 ft asl. The excursion takes eight to twelve hours depending on the pace and the glaciers conditions. Due to the duration and character of the endeavor, it is mandatory to be in very good shape. Technical experience helps but, is not a must.

The ascent starts around four in the morning. From that moment it covers 4.4 miles gaining 4430 feet across spectacular snowy glaciers and steep ridges, reaching the summit around noon. After a peek from the top the descent starts down along the same route reaching the refuge around three pm. 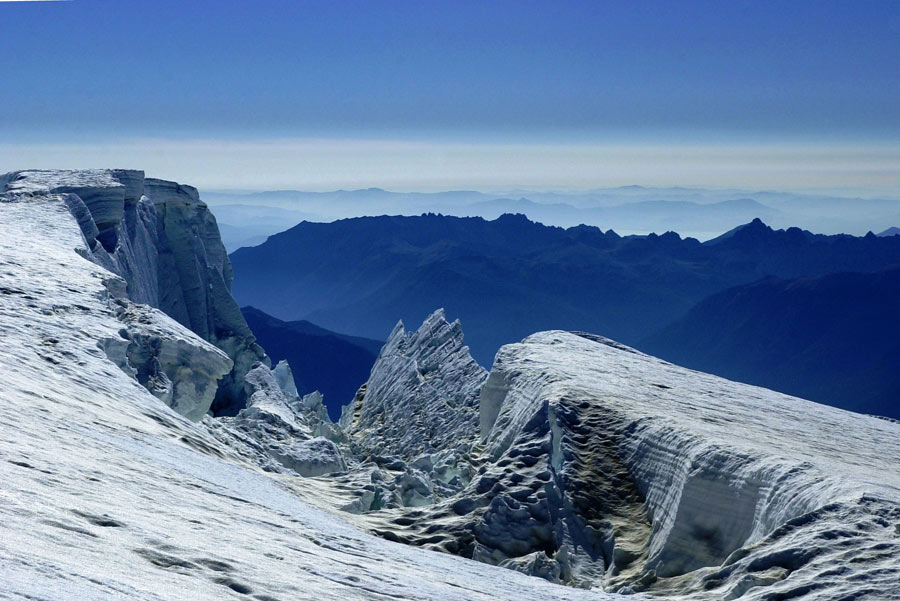 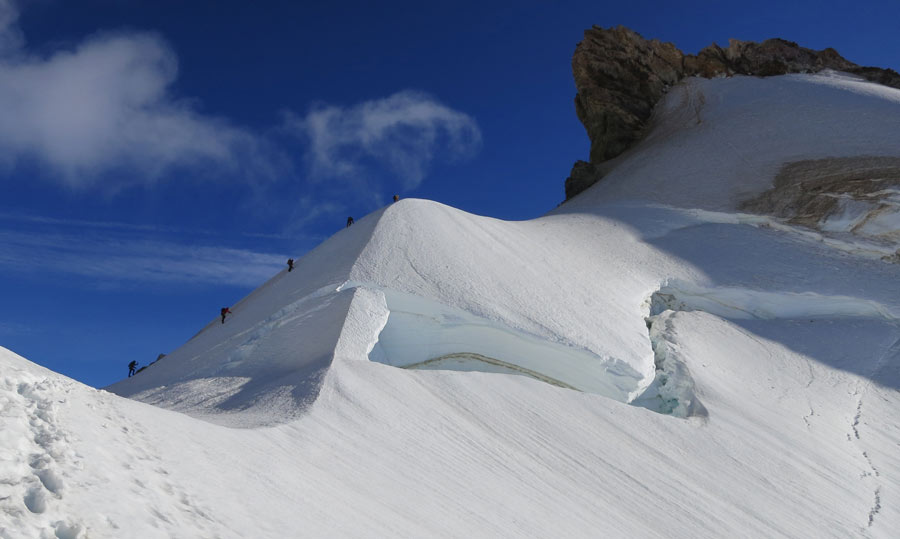 One of the best and most spectacular panoramic viewpoints of Mt. Tronador and Nahuel Huapi National Park: Punta Cóndor (7200 ft asl). From its remote pinnacle it is possible to admire the entire north face of this icy giant, Glacier Casa Pangue, abruptly descending for about 6500 vertical feet from the summits down to the bottom of the valley.

To get there we cross the Alerce glacier going around La Motte ridge on the north side. Then we descend on a steep snow and rock slope to reach and cross the Frías glacier and climb final ascent.

The variety of terrains traveled and their incredible beauty widely complement the allure of the surrounding landscape.

This trip demands six to eight hours to go and back, alternating several ascents and descents. This is an excursion on which you should really keep your camera at hand. It is recommended for people with a good physical condition and a background in mountain trekking. 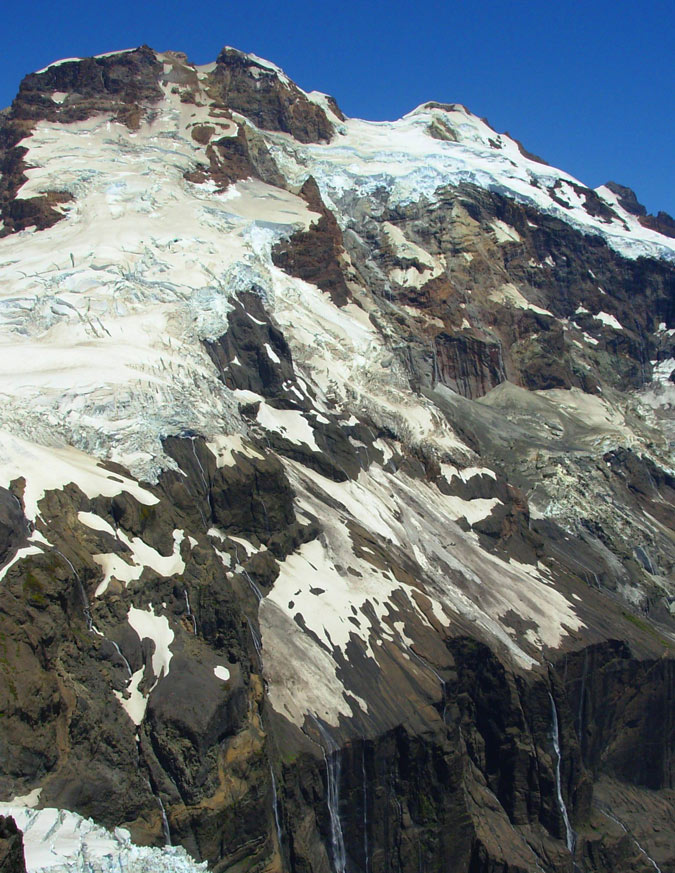 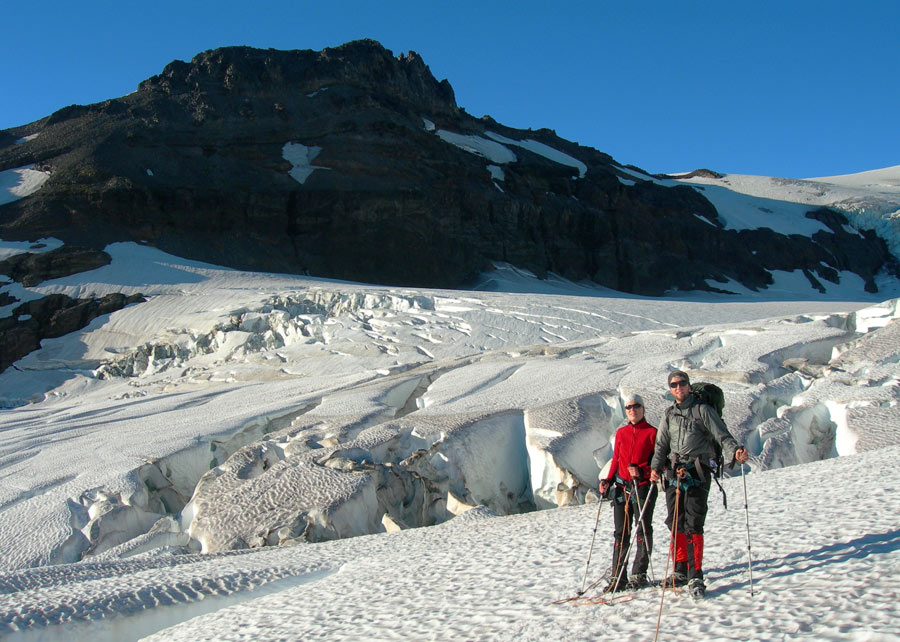 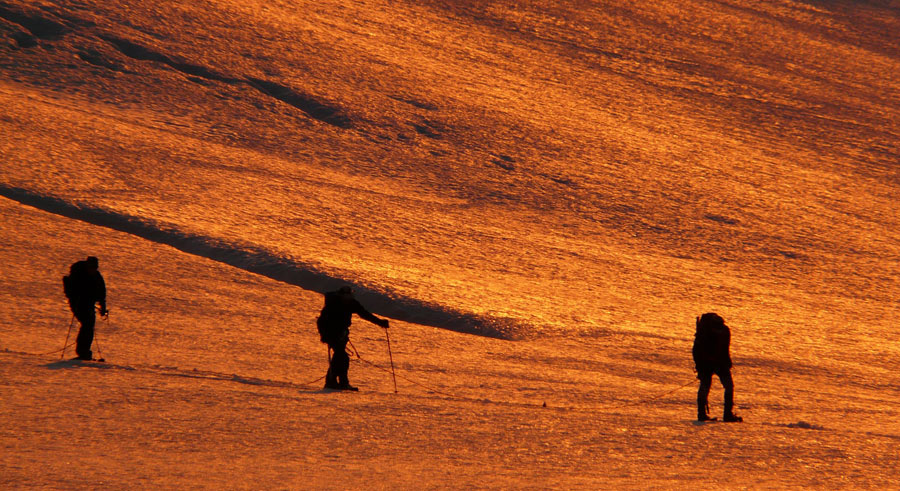 The use of snowshoes to walk on soft snow with less effort is ancestral. Today, with the accumulated experience and the development of new materials, this gadget has spread its range of use and adapts to almost any kind of shoes. Thanks to the addition of crampons they can also handle hard snow on moderate slopes improving the grip.

We propose an introduction to the use of snowshoes on a very simple itinerary of moderate distance, allowing pauses, giving space for a recreational and educational approach during the excursion. Starting from the refuge we rope up to ascend gently for about two miles on the glacier, be it towards the La Motte ridge or the Camping ridge, both places with very spectacular panoramic viewpoints. After enjoying the landscape we descend back to the refuge.

Including preparations and pauses, around three and half hours are needed to complete the adventure. If done in the morning, it is possible to start going back down to Pampa Linda in the afternoon, even to catch the bus to Bariloche on time. Anyone who made it to the refuge will enjoy this trip since using the snowshoes comes really easy and natural. 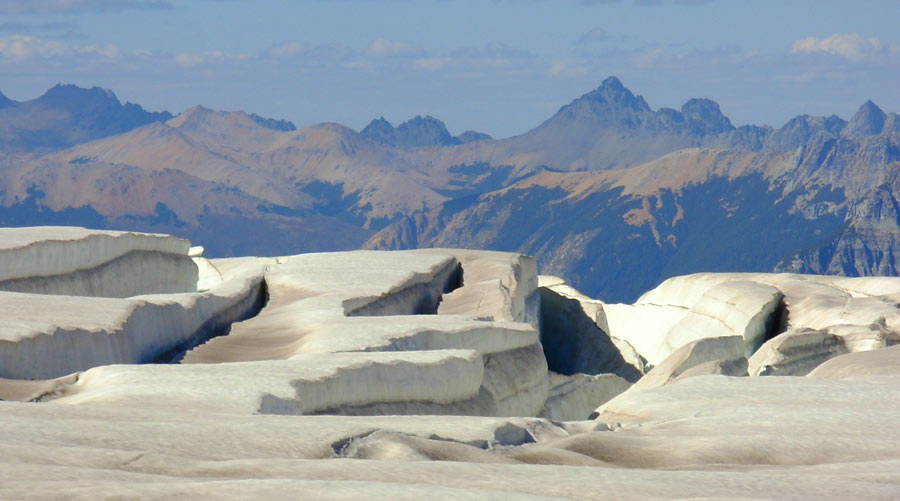 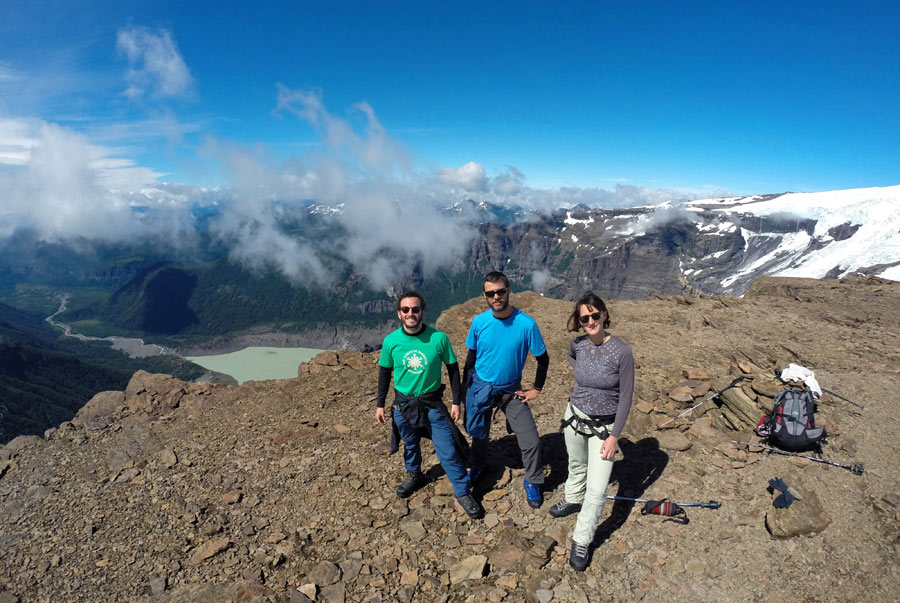 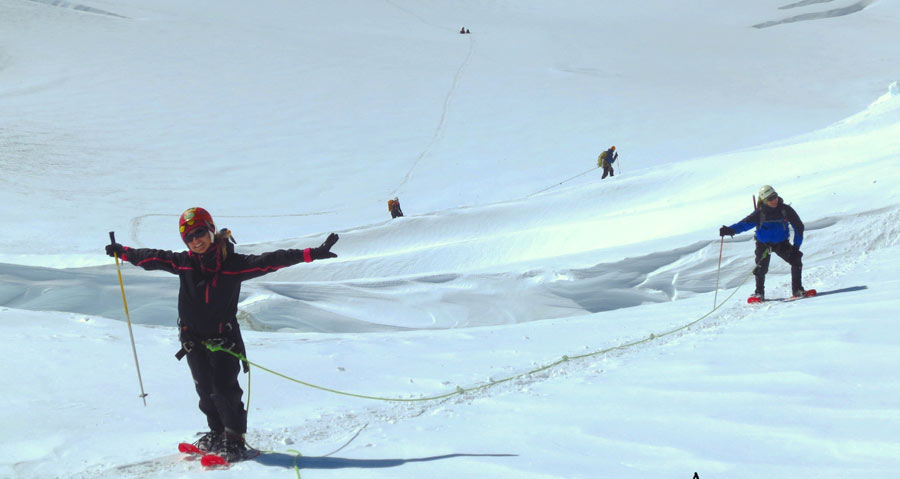 Connects the Meiling Refuge (6135 ft asl), standing on the northeast side of Mt. Tronador, with the old Tronador Refuge (7450 ft asl), a good shelter but without any service, holding up to eight people, built between 1937 and 1938 on a ridge on the south side of the mountain.

The traverse crosses the Castaño Overa and Manso glaciers, passing over La Vieja ridge just half way, covering more than 4.3 miles over spectacular crevasse fields. Once the excursion ends, the guide returns to Meiling with the gear and the clients have the option to start the way back to Pampa Linda along the Paso Vuriloche trail right away or the next day, spending the night at Tronador Refuge.

Due to the difficulty and isolation of the itinerary it is necessary to be in very good shape and that at least one person in the group has a good trekking background, orienteering skills, VHF radio and the knowledge to use it, along with a minimum group gear for sleeping, first aid, cooking, etc. 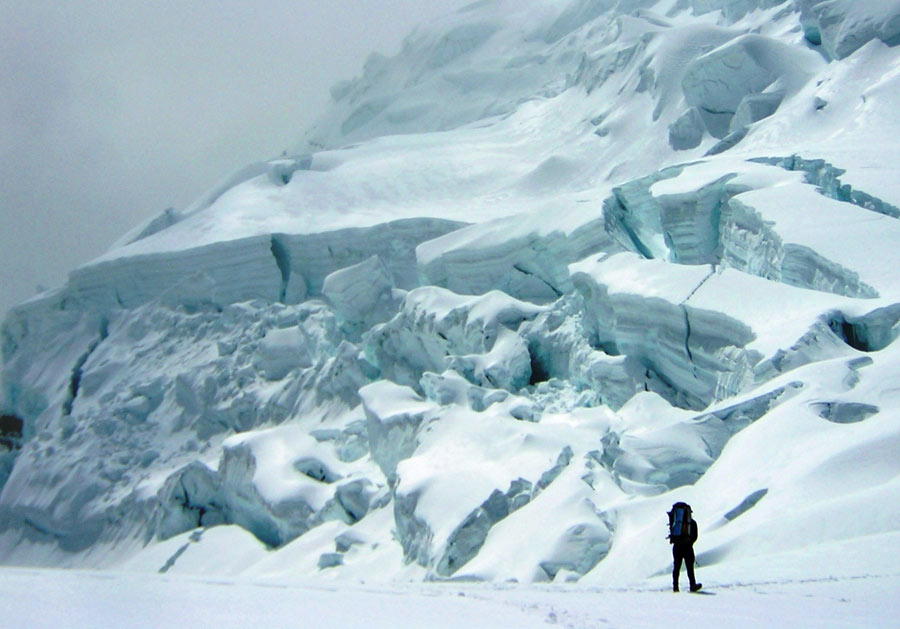 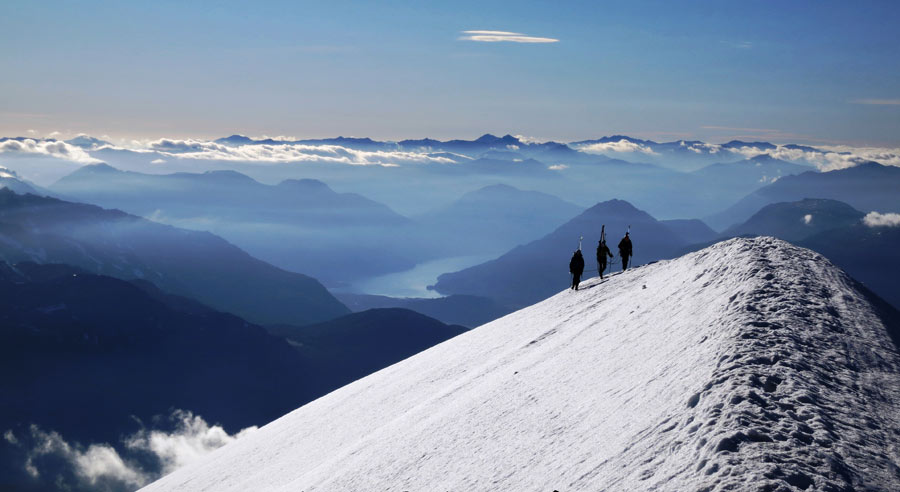 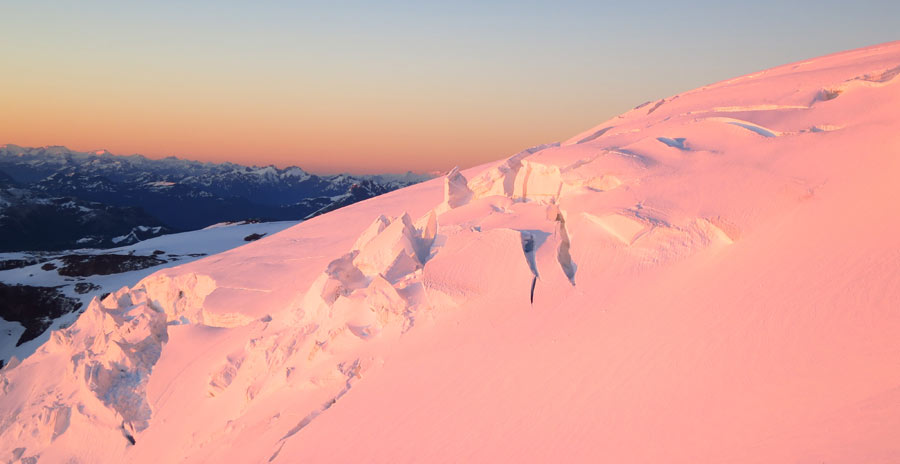 A circuit created for those looking for a moderate difficulty glacier travel on high mountain terrain, combining several different attractions, such as the crossing of two glaciers, the visit to a couple of the best viewpoints of Tronador and a summit. Along the way there are views of the Ventisquero Negro (a black glacier 3000 ft. below), the summits of Tronador from new perspectives, glaciers Castaño Overa, Manso, Frías, Alerce and the Condors Ridge, among many other points of interest.

The adventure starts at the refuge heading southwest across glacier Castaño Overa to reach the Ventisquero Negro viewpoint on the Camping ridge with an impressive glance over the valley of the Manso Superior River, Mt. Volcánico, Tronador refuge and many other astonishing landscapes.

Then the trip continues up-hill heading north across the Castaño Overa glacier´s accumulation zone passing by the lower part of La Vieja ridge amongst spectacular crevasses until a steep slope to be climbed with the safety of the technical gear before the summit of La Motte ridge.

After a deserved rest with an overwhelming view the descent goes along the north side of the ridge. On this stretch views of Mt. Constitución, the crevasses at the melting area of glacier Frías, the lake and valley of the same name, the wonderful environment of Paso de las Nubes and the valley of the Alerce river are enjoyed from a privileged perspective.

To close the circuit, there’s the crossing of the Alerce glacier, heading south, passing by Pablo’s Rock to get back to the refuge in the afternoon. 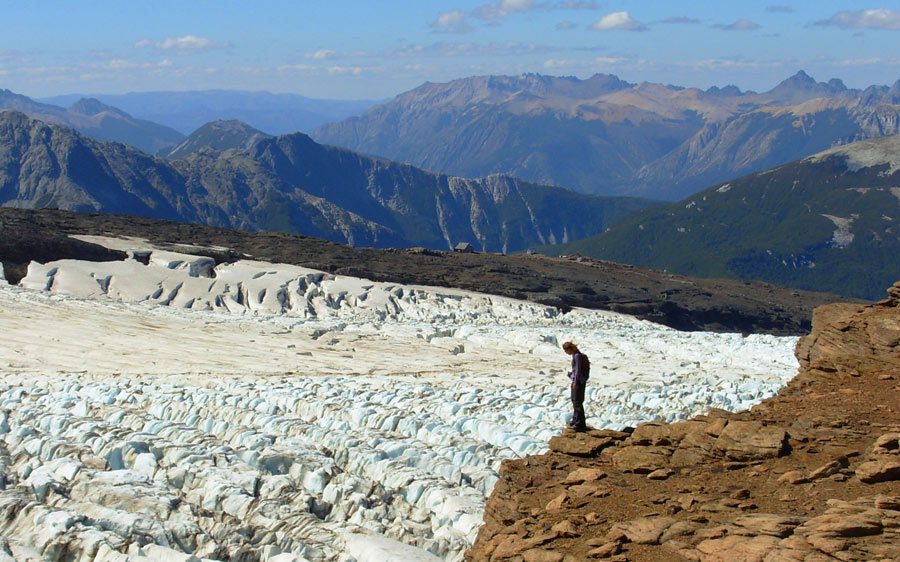 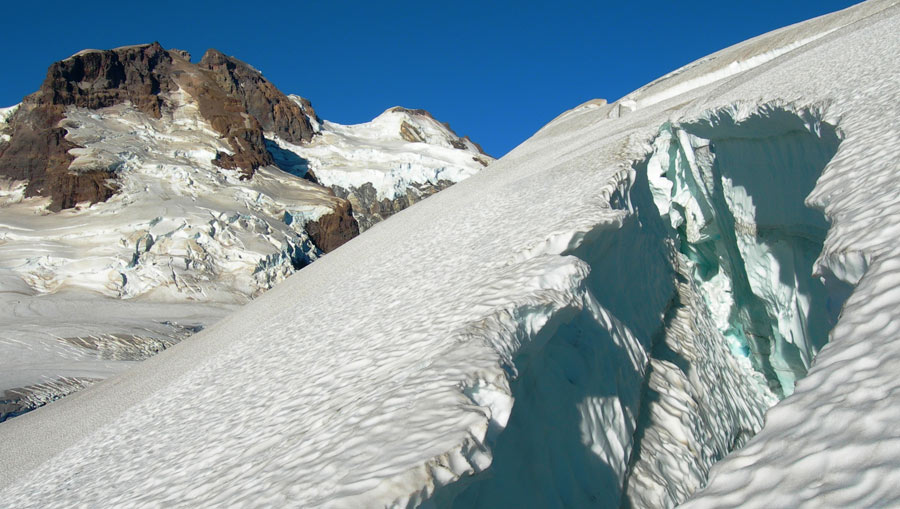 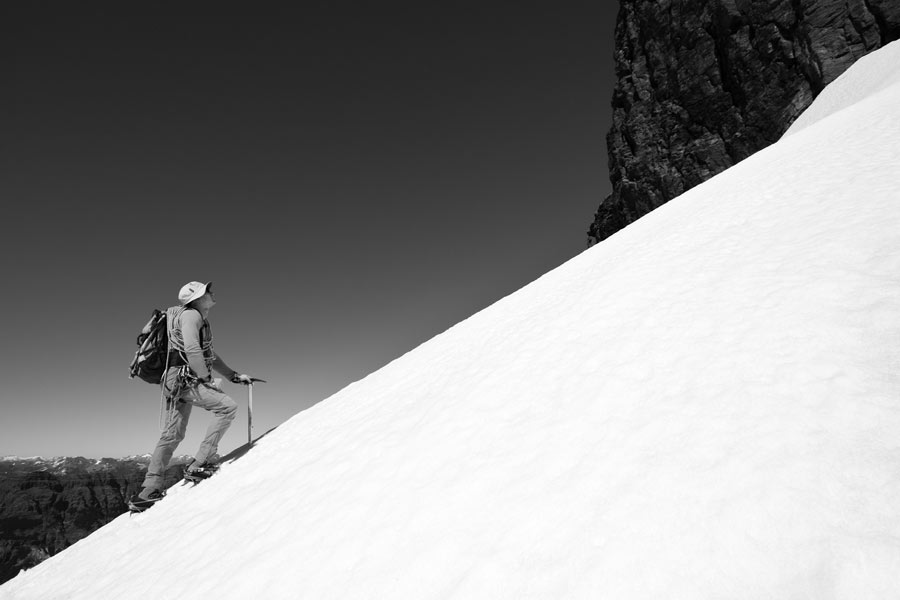